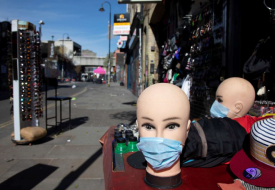 (Bloomberg) -- European leaders are scrambling to enforce unprecedented restrictions on the movement of their populations in a desperate attempt to prevent their health-care systems being overwhelmed by the coronavirus pandemic.

On a weekend that saw more than 2,000 people killed by the virus in Italy and Spain, Germany banned gatherings of more than two people and the U.K.’s Boris Johnson threatened “tougher measures” unless British people stop ignoring calls to avoid social gatherings. Officials in Rome decreed a halt to almost all domestic travel while Spanish Prime Minister Pedro Sanchez extended the state of emergency in his country for another two weeks.German Chancellor Angela Merkel put herself in quarantine as a precaution after coming into contact with a doctor who tested positive for the virus.

After a week in which the European Union unleashed its fiscal and monetary firepower to mitigate the economic damage — and to calm financial markets — the mounting death toll brought a grim reminder that in the clinics and hospitals at the heart of the outbreak, the virus is overpowering medical professionals.

Decisions by Merkel and German state leaders on Sunday move Europe’s biggest economy closer to the drastic steps taken in Italy, the country with the most novel coronavirus deaths worldwide.

Before heading home from the Chancellery for what it turned out would be her self-imposed quarantine, Merkel said Germany’s two-person rule won’t apply to families and people sharing a home.“No one wants to stand before the people and discuss such rules,” she told reporters in Berlin. “We are in a really tough situation.”

In the U.K., Johnson may decide as soon as Monday to impose restrictions similar to Germany’s. Weekend newspapers reported that Britons were now meeting in parks and making trips to coastal towns, after the government last week ordered pubs and restaurants across the country to close.

“We need to think about the kinds of measures that we’ve seen elsewhere,” Johnson said at a televised press conference on Sunday. “Some people are not making it easy for us because they are congregating in a way that helps spread the disease.”

Italy, where the disease has killed almost 5,500 people, ordered people to stay in their municipalities except for “non-deferrable and proven business or health reasons or other urgent matters,” according to the Health Ministry. The measure applies to all private and public transportation. However, Sunday’s toll of 651 fatalities was lower than the day before.

“We all hope that this trend can be confirmed in the new few days,” Angelo Borrelli, head of Italy’s civil protection agency, told reporters. “But we must not lower our guard.”

The latest source of concern is thousands of idled workers with roots in southern Italy who could head there and bring the disease with them. Vincenzo De Luca, governor of the Campania region that surrounds Naples, urged Conte in a phone call Sunday to take “drastic measures” to block such an influx.

In Spain, Sanchez will seek parliamentary approval to extend a state of emergency to April 11 after almost 400 coronavirus deaths in the past 24 hours lifted the total to 1,720, the second-highest in Europe.

Croatia called out the army after an earthquake on Sunday caused damage in Zagreb, the capital, potentially complicating the country’s response to the coronavirus.

Hungarian Prime Minister Viktor Orban is seeking to extend a state of emergency indefinitely and threaten prison time for anyone spreading false information about the virus. Those measures would require support from opposition lawmakers to pass.

Merkel has been at odds with some of the Germany’s 16 state governments about how best to contain the virus, which has infected almost 25,000 people and claimed more than 80 lives.

The chancellor is against a rigid lockdown, fearing that such a measure could backfire, and wants a more coordinated national approach on restrictions to public life. Most German states indicated they will implement the new rules, which include closing restaurants except for delivery and takeout.

As she gets to grips with running the country from her Berlin apartment, Merkel plans to get an emergency budget through the Bundestag this week to allow an extra 150 billion euros ($160 billion) of spending, the central pillar in Europe’s fiscal response to the crisis.

Reduce contact with people outside your household to a minimumWhen outside, meet no more than one person at a time that’s not a family member or lives in your householdKeep a distance of 5 feet (1.5 meters) from anyone outsideYou can go to work and to appointments or the doctor, do grocery shopping, practice sports or walk outsideNo groups of people partying anywhere in public or privateServices such as hairdressers, tattoo and cosmetics studios will close. Bars and restaurants will be shuttered except for takeout.