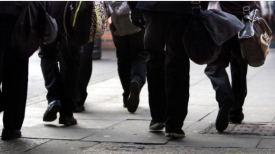 EXCLUSIONS for drug and alcohol issues in the district’s schools have hit a record high, new figures reveal.

According to the Department for Education, Bradford-district schools excluded students 146 times for drug and alcohol-related matters in 2018-19 – up from 100 the previous year and the highest figure since records began in 2006-07.

The exclusions were in state-funded secondary schools, with none in special schools or primaries. Exclusions from independent schools are not covered by the data.

A Bradford Council spokesman said: “Drugs and alcohol in schools is sadly a national problem. A lot of good work goes on in our schools around this issue and others, such as mental health, which may lie behind discipline problems.

“Across the district we have a range of agencies working together to help children and young people who may need additional support.

“We have Safer School police officers and individual help is offered through mentor support where needed and referrals to agencies such as the Bridge Project.

“The Young People’s Drug and Alcohol Service also provides advice, information and support to young people and their parents and carers.”