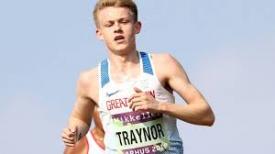 Briton Luke Traynor has been suspended from sport for two years for cocaine use, having served 13 months to date.

The Scot failed a UK Anti-Doping (Ukad) test after the stimulant was found in his urine at the Vitality London 10km race in May 2019.

Traynor, 26, said the cocaine trace related to out-of-competition use and was unrelated to sport performance.

Ukad director of operations Pat Myhill said: "We are urging athletes to consider the significant risk that goes hand in hand with using cocaine.

Athletes should be aware that cocaine, used out-of-competition, often stays in the system."

He has also represented Great Britain in the European Cross-Country Championships at under-20 and under-23 levels.

I have made an incredibly stupid and uncharacteristic mistake and for that I am deeply sorry," he wrote on Twitter.

This happened as a one-off and in a purely social situation with a drug I should never have taken."