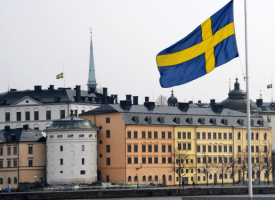 More than one million Swedes are now taking medication for depression, while a study has found people in Stockholm feel insecure due to surging crime.

Around one in ten Swedes now take antidepressants, a number that has doubled over the last two decades, becoming one of the countries with the highest use of antidepressant drugs, Swedish broadcaster SVT reports.Mikael Tiger, a psychiatrist and researcher, stated that there are several reasons for the rise, including cheaper medication and less stigma attached to those who take the drugs.

The most significant increase in demand for the drugs has been children aged 10 to 14, but it is individuals over 80 years old who have the highest usage of the medication.

Increasing levels of crime have also led to more and more residents in and around Stockholm becoming anxious over being alone in some public areas, according to a study by the County Administrative Board.

Over the last eight years, the number of people who feel unsafe in their own neighbourhood during the day has doubled from 11 to 20 per cent, with nearly half, 44 per cent, saying they did not feel safe alone at night.

The report claims that every third person has refrained from activities and stayed home due to fears over being a victim of crime, with women and young people expressing the highest levels of anxiety.“Gang shootings, crime and more and more threats and violence against socially important functions create insecurity among people,” local Moderate party politician Irene Svenonius said.

“When so many people are insecure, it is tearing apart society,” Svenonius added.The study echoes similar reports, including one released in January, that stated nearly half of the women in their twenties felt insecure, fearing they could become a victim of crime.