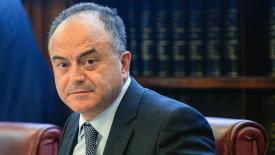 The ’Ndrangheta has proved hard for prosecutors to crack, because its organizational structure is based on blood ties. In other Mafias, the structure is looser, and members more easily break away. Historically, very few ’Ndranghetisti have betrayed their family. Of the more than 1,000 people who became state’s witnesses in Italian organized-crime cases in recent years, only about 15 percent are members of the ’Ndrangheta. But that is slowly changing, as the mass arrests in December, based in part on information from inside, suggest. The ’Ndranghetisti who break their oath, Gratteri told me, usually do so out of love or out of fear. They are young men who don’t want to spend their entire future in prison, and who may have wives or girlfriends on the outside. Or the informants are women who have married ’Ndranghetisti and want their children to have a different life. Even so, the ranks of the ’Ndrangheta remain largely loyal.

The ’Ndrangheta emerged in 19th-century Calabria, as the region’s feudal economy was chaotically giving way to the forces of capitalism. In the early years, the organization’s members operated mainly as robbers and brigands, before expanding into smuggling, extortion, and abduction. The most famous of its hundreds of kidnappings was that of J. Paul Getty III, in 1973. (Despite their initial reluctance, the Gettys paid a ransom of about $3 million after the kidnappers sent Paul’s severed ear to the family in the mail.) The modern ’Ndrangheta was born in the 1980s, when it moved into cocaine, leaving the less lucrative heroin trade to the Cosa Nostra.

In Italy, the ’Ndrangheta sells cocaine to other crime groups—often Albanian or Nigerian—who in turn sell it on the street. Such outsourcing keeps the ’Ndrangheta away from the piazzas and focused on more sophisticated ways of making money, such as siphoning off European Union funds meant for agriculture and infrastructure. Meanwhile, the fact that foreigners are selling drugs on the street all over Italy is a major factor in the popularity of the right-wing League party and its anti-immigration “Italians First” rhetoric.

Still, the group is more than willing to get its hands dirty. In 2012, six men were given a life sentence in Italy for murdering a woman who had been cooperating with police against the ’Ndrangheta. (They had strangled her and burned her body.) The ’Ndrangheta operates according to a simple rule: If you screw up, you’ll be killed. In 2015, a 22-year-old man was arrested in Italy for ordering the murder of his own mother, allegedly as punishment after she’d had an affair with a boss from a rival ’Ndrangheta clan.

How do you build a case against a group like the ’Ndrangheta? I asked Gratteri. He has spent years immersed in the details—the crimes, the arrests, the sentences, the appeals, the personalities, the interconnections. His mind holds an encyclopedia of the group. In the case that resulted in the mass arrests in December, Gratteri and his team spent four years compiling evidence. He ticked off some of the methods: copious wiretaps; geothermal imaging, which can detect underground bunkers; close cooperation with law-enforcement agencies worldwide; an understanding of the group’s rules and rituals; a feel for how the organization adapts to new technologies and investment opportunities, such as cryptocurrencies. The indictments relied on the testimony of about 20 former ’Ndranghetisti turned state’s witnesses, a record number, Gratteri told me.

It has been particularly difficult to crack the ’Ndrangheta overseas. Italian law gives prosecutors like Gratteri strong tools with which to fight organized crime. Most notably, they can order asset seizures while investigating someone on charges of “Mafia association,” a broad category that does not exist elsewhere in Europe or abroad.

Gratteri enjoys questioning people, and he has the right demeanor for it: calm, focused, respectful, but also inscrutable. He somehow manages to build trust with criminals. A while ago I came upon a YouTube video of Gratteri speaking with one of the biggest fish he’d caught in all his years as a prosecutor: Roberto Pannunzi, the man credited with forging ties between the ’Ndrangheta and the Medellín cartel in Colombia.

Pannunzi, sometimes called “the Pablo Escobar of Italy,” was first arrested in Colombia in 1994, for drug trafficking. After being extradited to Italy, he eventually obtained a medical dispensation, and fled the country. In 2004, Italian authorities tracked him down in Spain. He was extradited to Italy again, and Gratteri went to see him. Gratteri told him, “You’re going to spend 30 years in prison, so there’s not much you can do about that. ” And Pannunzi replied, “No, dottore, I’ll get out. I have so much money that I could cover you and that marshal with money. I could bury you with money. ” And indeed, Pannunzi escaped again in 2010 by claiming to have heart trouble, getting himself transferred to confinement at a clinic, and then fleeing.

Italian authorities tracked him down once more, in 2013, this time in Colombia. He was extradited to Italy once more, and Gratteri flew to Rome for his arrival. “I saw him, and he said, ‘Buongiorno, dottore, how are you?’ ” Gratteri recalled. “I said, ‘Did they treat you well?’ And he says, ‘Yes, they treated me well; the flight went fine.’ ” The two men spoke as if they were old friends. Someone filmed the meeting, and it wound up online.

I have watched the video over and over. What strikes me most is the mutual familiarity. Because Gratteri grew up in Calabria, he is cut from some of the same cloth as his adversaries. It is clear from the video that Gratteri and Pannunzi understood each other, and on some level respected each other. “He understood my authority,” Gratteri later told me about the meeting.

Gratteri lives in a walled compound ringed with cameras and guarded by police. He coordinates every move with his police escort and tells his wife the bare minimum. He travels constantly—throughout Italy, the rest of Europe, beyond. He goes to bed by 10 p.m. and often wakes up at 2:30 a.m. to start work.

I visited Gratteri one day at the courthouse in Catanzaro. Every so often, people would knock on the bulletproof door, and he would check a monitor before buzzing them in.

From here, Gratteri masterminded the indictments at the heart of the new maxi-trial. Gratteri seeks to lay bare the organizational structure of the ’Ndrangheta—how the group forges links with Italian politicians, institutions, economic interests, and other elements of society—much as the maxi-trial in Palermo revealed how the Cosa Nostra operated.

The strength of mafiosi essentially comes from their external relations—the social capital that derives from their ability to force ties and construct social networks,” Antonio Nicaso, an expert in the ’Ndrangheta who teaches at Queen’s University in Ontario and has co-written 14 books with Gratteri, told me. The maxi-trial could also serve as an investigative model for law enforcement elsewhere.

As we neared Rome on our drive that day, I mentioned to Gratteri that, years ago, a magistrate in Calabria had told me that he was more afraid of some elements in Italy’s anti-Mafia establishment than he was of the Mafia. That remark, delivered almost offhandedly, stayed with me. It suggested that Italy was a dark place, where the people you thought were on one side were in fact helping the other, even if only by averting their eyes. Gratteri is aware that the ’Ndrangheta tries to influence, however nebulously, the ranks of the magistrates. He thought back to certain colleagues in the judiciary and what he remembers some of them said to him.

When I was young, I thought it was advice,” he said. “Then I understood these were messages”—subtle reminders that it might be best if he didn’t peer under this rock or open that door.

When I asked Gratteri what it took to get up every morning and do this kind of work, knowing that people want to kill him, he grew philosophical. “Everything has a price,” he said. He hasn’t gone anywhere without police protection since 1989, he said. He hasn’t been to the movies in 30 years. His house is a heavily surveilled fortress—“like Big Brother,” he said. But inside the walls, he has a vegetable garden. He grows tomatoes, eggplant, basil. His voice became almost tender as he listed the vegetables, like a parent naming children.

I’m a man in a cage,” he said. As much, in some ways, as any defendant in a maxi-trial. “But in my mind, I’m a free man.” He pointed a finger to his temple. “I’m free in my choices and free to decide. Free to think and to speak my mind.” He continued: “I can say what others can’t allow themselves to say, because they don’t have their affairs in order. Because they can be blackmailed. Because they’re afraid. Because they’re cowards.”

Author: RACHEL DONADIO - a Paris-based contributing writer at The Atlantic, covering politics and culture across Europe.