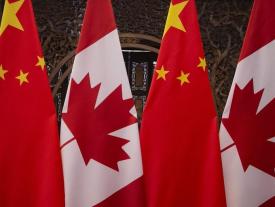 A Chinese court said on Friday it had sentenced a Canadian to death for transporting and manufacturing drugs, the second Canadian in two days to receive a death penalty for drugs and fourth since Canada detained a top Huawei executive in 2018.

Asked if the sentencing of the Canadian drug offenders was linked to Meng’s case, China’s foreign ministry spokesman Wang Wenbin told a briefing on Friday that China’s judicial organs “handle cases independently”, while also adding that “the Canadian side knows the root cause” of difficulties in China-Canadian relations.

Ye Jianhui, a Canadian national, was sentenced after a trial in the southern city of Foshan, the Foshan Intermediate People’s Court said in a notice on its website.

Police found 218 kilograms (481 pounds) of white crystals containing MDMA, commonly known as ecstasy, in the room used by Ye and five other men, according to a local media report.

Of the other five men, all Chinese nationals, one was sentenced to death, while the rest were given jail sentences ranging from seven years to life, according to the court notice.

The sentencing of Ye and his accomplices came just one day after another Chinese court sentenced Canadian Xu Weihong to death for making drugs.

Canada requests clemency for all Canadian citizens who have been sentenced to death, and calls on China to grant clemency to Mr. Xu.” said the Canadian foreign ministry spokesman John Babcock when asked about Xu.