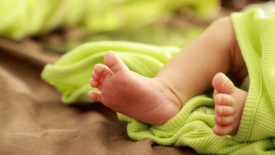 Rebecca Hallock, 37, of Scranton, Pennsylvania, has been charged in a devastating incident involving her 3-week-old child. According to police, Hallock was under the influence of drugs while sleeping with the baby in the bed with her. The newborn was then reportedly suffocated to death while Hallock was asleep and sadly, this isn't the first time it's happened to the mom.

The incident happened in November 2019.

According to Penn Live, Hallock had woken up after co-sleeping with her newborn son only to find that the infant wasn't breathing. She refused to perform CPR, Fox 56 reported, and the baby boy was later pronounced dead.

Recently, a forensic pathologist shed light on information that eventually helped lead to her being charged.

The pathologist determined the cause of death was "compatible with mechanical asphyxia due to co-sleeping with parent," Penn Live reported.

A blood test also revealed that Hallock had drugs in her system that night.

The mom allegedly had methamphetamine and THC in her blood. As a result, police now say that the mom caused her child's death by co-sleeping while under the influence.

After the months-long investigation, she's now been charged with involuntary manslaughter, reckless endangerment of another person, and endangering welfare of children.

Even without drugs or alcohol, co-sleeping is a dangerous practice that parents are warned to stay away from.

According to the Journal of American Academy of Pediatrics, co-sleeping "should be avoided at all times."

Particularly for "bed-sharing with a term normal-weight infant younger than four months and infants born preterm and/or with low birth weigh."

National Public Radio states that about 3,700 babies die each year from sleep-related causes. It also noted that in cases where the parent has been using drugs or alcohol, the situation can be even more dangerous because they are more likely to roll over the baby and kill it. Babies are 18 times more likely to die from SIDS sleeping next to a parent who's been drinking. There was similar risk for babies sleeping on sofas.

These situations don't happen often, but when they do, they are often lethal," Peter Blair, medical statistician at the University of Bristol who has studied SIDS epidemiology for 25 years, told the new outlet. "There have been many studies showing this."

The Children's Hospital Los Angeles website states that parents should have their babies sleep near them but on their own separate surface "like a crib, bassinet or cradle to avoid safety risks, injury or even death."

Sadly, this isn't the first time one of Hallock's babies died while co-sleeping with her.

In 2017, the mom told police that she fell asleep on her 1-month-old and killed him or her through suffocation, Fox 56 reports. But police were suspicious that drugs were involved.

Police asked her at the time what substances she used and she told them she only takes Subutex for her pain medication addiction.

Authorities later found that this was a lie. A blood test revealed that she had drugs in her system, this time meth and amphetamine, as well as THC.

She ultimately confessed to police that she snorted meth and told them that she struggles with addiction. The cause of death in that case was ruled accidental.

It's not clear if Hallock has retained a lawyer.