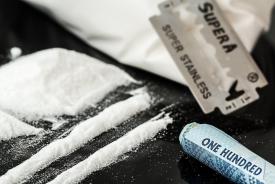 Mexican authorities said Monday that they had seized nearly three kilograms of cocaine found in a toilet on an airplane arriving on a commercial flight from Colombia.

The drugs were discovered in a trash bin by the crew after the aircraft landed in Mexico City, the National Guard said in a statement, without identifying the airline.

The five packets, wrapped in plastic and weighing a total of 2.86 kilos (6.3 pounds), were handed over to the Attorney General's Office for investigation.

Mexico is on one of the main drug trafficking routes from South America and passengers from the region often face strict checks upon arrival.