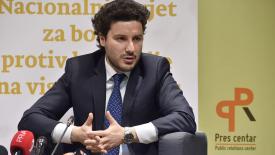 A notorious drug-trafficking gang planned to attack Montenegro's deputy prime minister in revenge for the arrest of several of their members, officials said on Monday.

The alleged boss of the gang and five of his associates were detained last Tuesday, suspected of being involved in a regional gang war over the cocaine trade that has led to dozens of deaths as far afield as Austria.

Deputy Prime Minister Dritan Abazovic hailed the arrests at the time as the country's "biggest success in a decade" in the fight against organised crime.

But on Monday, the interior ministry revealed details of the gang's intended retribution.

They planned "to take actions aimed at endangering the life of the deputy prime minister... as a reaction to their arrest and prosecution for committing serious and organised crimes", said the ministry.

The arrested men are all accused of belonging to a gang that operated out of the seaside resort town of Kotor, with suspected kingpin Slobodan Kascelan among those held.

They are accused of crimes including murder.

Warrants were issued for eight other suspected members of the clan, which has been battling for six years with a rival gang for control of cocaine smuggled from South America.

At least 40 people have been killed in Montenegro, Serbia, Austria and Greece as part of the conflict.

We are dealing with criminal groups with regional influence," Abazovic told the media last week.

The police nearly lost control of the situation on Friday, however, when a judge ordered the suspects to be freed -- only for them to be re-arrested hours later.

Organised crime has deep roots in Montenegro, a former Yugoslav republic of just over 600,000 people that has served as a transit point for illicit cigarettes and drugs.

Local gangs reportedly have direct links to crime groups in South America, which gives them a dominant position for the supply of cocaine to Europe.