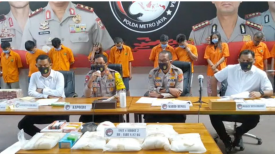 The Jakarta Metro Police have named eight suspects for alleged drug manufacturing in Bali, who authorities believe are part of an illicit drug operation controlled by a convict detained in one of Bali’s prisons.

Nana Sudjana, Jakarta Metro Police chief, told reporters in the capital on Monday that the drugs are manufactured in the form of liquid vape and produced in a home industry located in South Kuta, Badung regency.

The illicit drug operation is controlled by a convict identified by the initial K, who is currently serving time in one of Bali’s prisons, Nana said.

Authorities came to discover the alleged drug manufacturing after arresting one of the eight suspects, identified as FA, in Cawang, East Jakarta earlier this month.

“FA was arrested on June 12 around Cawang, East Jakarta with five bottles of liquid drugs as evidence. We looked more into it and found that it was acquired from Bali,” Nana said.

Police say that the illegal business started operating in January, and the items have been sold online both in Bali and Jakarta for billions of rupiah in profit every month.

“This syndicate has been playing between provinces and islands, from Jakarta, West Java, Sulawesi, Sumatra, and Bali. Their turnover is in the billions of rupiah,” Nana added.

The drug manufacturing evidently uses synthetic tobacco imported from China, the procurement of which is also handled by K, according to authorities. Police say they found 24 kilograms of this item at the Bali home industry, along with seven liters of liquid vape and 500 grams of cannabinoid powder.