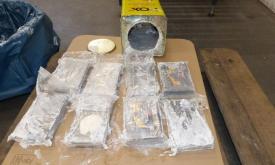 A total of 27.64 tonnes of cocaine has been seized at the port of Antwerp since February 20, including 11 tonnes found in a container overnight Friday-Saturday.

The cocaine "can be directly linked to the Sky ECC case", the prosecutor's office said.

The chief executive officer and an associate of Sky Global were indicted in the United States in March for allegedly aiding drug smuggling.

The inquiry has seen 48 people arrested in Belgium and the recovery of guns, police uniforms and 1.2 million euros ($ 1.4 million).

Investigations have spilled over into other countries including France where five people were charged at the end of March for selling encrypted telephones to drug traffickers.

From this data, dozens of drug shipments have been intercepted since February 20," it added.

Inquiries into the people implicated were continuing.