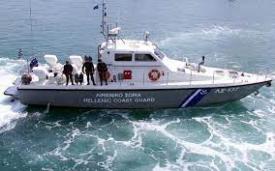 Greek authorities say coast guard divers have seized more than 46 kilograms (101 pounds) of cocaine found hidden behind a water intake grate in the hull of a cargo ship that arrived in Greece from Brazil.

Video released by the coast guard shows a diver unscrewing a grate from the side of the ship under the waterline, and removing a large black waterproof bag which contained 46.7 kilograms of cocaine in 38 plastic packages.

The drug bust comes four days after Greek authorities said another DEA tip led to the seizure of more than four tons of cannabis hidden in a shipment of industrial cupcake machines that arrived in Greece from Lebanon.

The Skyros had set sail from the Brazilian port of Santarem heading for Corinth in Greece with a cargo of soy, the coast guard said.