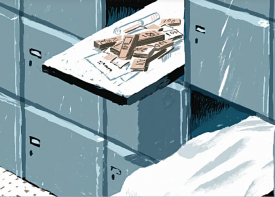 As different ’Ndrine have become hugely wealthy, however, parts of their younger generations have started to look very different from the rural bandits of their grandfathers’ era. With more money and increasingly complex operations, a new class of mobster has emerged that can apply business-school analysis to the challenges of ­running an international criminal conspiracy. “A number of the younger generation, those who I grew up at the same time as, have degrees from the London School of Economics or even Harvard. Some have MBAs,” says Anna Sergi, a Calabrian-born criminologist at the University of Essex. “They live outside Calabria and appear like respectable businessmen, not directly involved in street-level illegality but there to offer technical expertise when it is needed.” This increasing financial sophistication is coupled with a brutal approach to internal discipline. Those who are judged to have discredited the name of their family are at risk of being murdered by their own relatives. In 2011, the daughter of one criminal family died in agony after drinking hydrochloric acid. Her father, mother and brother were jailed for abuse after prosecutors failed to prove the more serious charge of forcing her to drink it as punishment for speaking to the police. While there have been violent conflicts between rival ’Ndrangheta clans, rational co-operation is accepted as good for business. Far less is known about the internal workings of the ’Ndrangheta than other Mafias, but investigators have uncovered evidence of a centralised conflict-­resolution committee made up of the most senior representatives of the largest ’Ndrine.

Anti-Mafia investigators say it is common for multiple families to pool their resources into criminal joint ventures, especially those focused on cross-border shipments of cocaine worth hundreds of millions of euros. It is through ruthless control over the economic activity inside their home territory that these families have created a base from which to rapidly expand their criminal activity abroad, reinvesting profits from extortion into highly lucrative drug trafficking and other criminal ventures. Anyone in their region who openly opposes the clans risks not only their own life, but also being blacklisted publicly. In some cases, the shadow of the ’Ndrangheta stalks them both at home and wherever they go to escape. Gaetano Saffioti, 59, runs a cement company in the town of Palmi, 100km from Catanzaro, the region’s capital. Eighteen years ago, he became one of a tiny handful of Calabrian businessmen to ­publicly testify against an ’Ndrangheta clan that had extorted money from him. Saffioti lives under police protection to this day.

In the years that followed, his business didn’t win a single contract inside Calabria. When he tried in other parts of Italy, his company’s trucks were set on fire. When he won a contract in France, his trucks were torched again. “They demand their part of anything you do — it is a tax that everyone has to pay. You can’t sell an apartment without paying them, you can’t open a business without their permission,” he says, speaking by telephone from his heavily fortified home. “It crushes the region,” he adds. “We are always getting poorer, but this is what they want. The weaker we are, the less likely we are to resist. The ’Ndrangheta has got inside of us, inside our minds. The majority simply adapt to the system.”