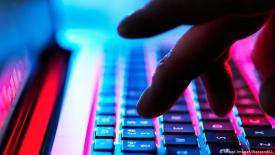 Authorities say the darknet platform had half a million users, where drugs, counterfeit money, stolen credit card data, anonymous SIM cards and malware were traded. The suspected operator was arrested in Germany.

German prosecutors in the cities of Koblenz and Oldenburg said on Tuesday that they had shut down what was "probably the largest illegal marketplace on the Darknet" called DarkMarket and arrested the man believed to operate it near Germany's border with Denmark.

The detained man, believed to be DarkMarket's operator, is a 34-year-old Australian national.

Authorities say drugs, counterfeit money, stolen credit card data, anonymous SIM cards and malware were all traded on the site, which had a half a million users and transacted business in cryptocurrencies equivalent to a value of €140 million ($170 million).

Oldenburg police said the raid took place over the weekend. "Investigators were able to shut down the marketplace and turn off the server on Monday," prosecutors said.

DarkMarket's bust was not the first for German authorities, which have found illegal platform operators on German soil in recent years. In 2019, Koblenz prosecurots announced the discovery of darknet servers hosted from a former NATO bunker in a sleepy German town.

US agencies like the FBI, DEA narcotics law enforcement division and IRS tax authority all contributed to the investigation, along with police from Australia, Britain, Denmark, Switzerland, Ukraine and Moldova, with Europol playing a "coordinating role."

A total of at least 320,000 transactions were carried out via the marketplace, with more than 4,650 Bitcoin and 12,800 Monero - two of the most common cryptocurrencies - changing hands," Oldenburg authorities added.

At the time of its closure, DarkMarket had more than 2,400 vendors.