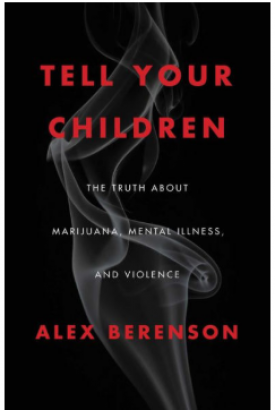 An eye-opening report from an award-winning  and former New York Times reporter reveals the link between teenage marijuana use and mental illness, and a hidden epidemic of violence caused by the drug—facts the media have ignored as the United States rushes to legalize cannabis.

Here are some episodes from the book with a very strong singificance:

"Thus, Justice Dalton determined that when she murdered her kids, Thaiday was suffering from a mental illness, paranoid schizophrenia, and that she had no capacity to know what she was doing was wrong.” Had Dalton ended her verdict there, the case would have been just another awful story of untreated mental illness. But she didn’t. She found Thaiday’s illness was no accident. Marijuana had caused it. “Thaiday gave a history of the use of cannabis since she was in grade 9,” Dalton wrote. “All the psychiatrists thought that it is likely that it is this long-term use of cannabis that caused the mental illness schizophrenia to emerge.” With those words, Dalton made one of the first judicial findings anywhere linking marijuana, schizophrenia, and violence—a connection that cannabis advocates are desperate to hide."

END_OF_DOCUMENT_TOKEN_TO_BE_REPLACED

‘But Mom, Video Games Are My Job’ The challenges for parents trying to...