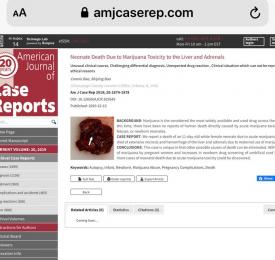 A recently published report describes the case of an 11-day-old female neonate who died due to acute marijuana toxicity and highlights the need for more research on the impact of marijuana use on pregnancy outcomes.

The patient, who was born at 36.5 weeks of gestation, had been found unresponsive at home by her 20-year-old mother with no indication of suffocation due to unsafe sleep practices; she was pronounced dead at the hospital. A complete autopsy and full investigation revealed multiple findings.

Macroscopic examination showed that the neonate had extensive hemorrhage of both adrenals, petechial hemorrhage of the whole liver, as well as focal hemorrhage of the thymus. A newborn drug screen of the umbilical cord homogenate revealed an elevated level of carboxy-THC (528 pg/g; screen cutoff at 50pg/g), indicating there was use of high-dose marijuana in late pregnancy.

The cause of death was declared to be “extensive necrosis and hemorrhage of the liver and adrenals”, which was deemed to be caused by maternal use of marijuana. The authors stated that this case was unique in that the cause of death was based on the principle of “diagnosis of exclusion”, which may not correlate to other cases of neonatal death due to substance use.

With growing use of marijuana by pregnant women, more cases of neonatal death due to acute marijuana toxicity could be identified,” the authors concluded. They added that “Forensic pathologists have a professional obligation to report these cases in peer-reviewed publications to inform the public for their ‘informed decisions’ about marijuana use.”