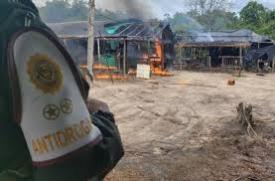 The head of the Ministry of internal Affairs of Venezuela, Nestor Reverol, reported the seizure of more than nine tons of cocaine and paste for the manufacture of cocaine on the border with Colombia.

Two large camps with 25 laboratories for the production of drugs were liquidated, and 9,173 kg of cocaine and Coca - based paste were seized on the border with Colombia, in particular in the municipality of Jesus Maria Semprun in the state of Zulia," Reverol wrote on Twitter.

According to the Minister, the operation was carried out by employees Of the armed forces of Venezuela and the National anti-drug administration.

The operation also destroyed more than 17 tons of chemicals and other tools used for the production of cocaine.