From drug addiction to starting over in Los Angeles, here's what came next for the lost members of Boyzone...

Few can forget the epic moment that Boyzone danced their way into the hearts of fans with a ramshackle performance on Ireland's Late Late Show in 1993.

Clad in dungarees with abs-a-plenty, the boys performed a bizarre dance routine to Clubhouse's Light My Fire, lunging and thrusting for all that they were worth.

But it wasn't just the epic dance moves that were amiss - eagle-eyed fans will also have noticed that something was off with the line-up.

While Ronan Keating, Shane Lynch, Stephen Gately and Keith Duffy were all present and correct, there was no sign of Mikey Graham. Instead, two other boys were dancing in his place.

Those were original members Mark Walton and Richie Rock, who parted ways with Boyzone just before they found fame with 1994's Love Me For A Reason.

So what caused the parting of ways and what came next for the duo who would eventually be replaced by Mikey?

Just 18 when he beat stiff competition from 300 others to land a place in the band, Richie quit school to spend 10 months rehearsing and mastering the routines. 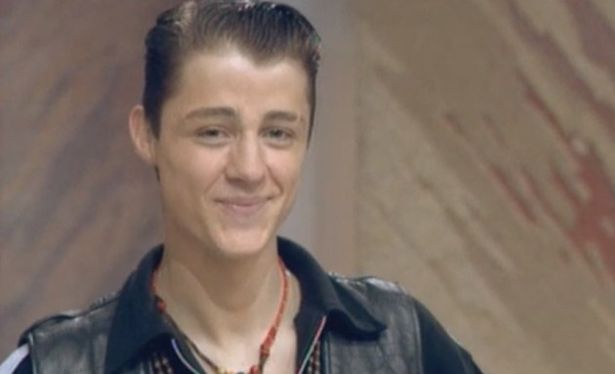 Richie was a baby-faced 18 year old when he won a place in Boyzone (Image: RTE)

As the son of Irish entertainer Dickie Rock, performing was in his blood and he claimed that in the early days it was him rather than Ronan who was the frontman.

I became the unofficial leader. I was the one who did a lot of organising - making sure the lads got to rehearsals, setting up meetings and pumping a lot of musical ideas into the band," he told The Mirror in 1999. We recorded three songs and had loads of photo-shoots to perfect our image. We were always rehearsing and we were slowly being groomed to become the biggest band to come out of Ireland since U2."

But it all fell apart when Louis sacked Richie for being late- just three weeks before the band signed with Polydor and got their big break.

He continued: "One day I was one hour late for a meeting with Louis and the lads in a bar. When I arrived Louis flew into a rage, saying I was unreliable and unprofessional. Then he told me I was sacked. The next day it dawned on me - I had been deprived of the biggest chance of my life. I rang Louis in desperation, but he never returned my calls."

Three days later Richard's place in the band was filled by Mickie Graham, and within three weeks Boyzone had signed record contracts with Polydor. They were an overnight sensation with first single Working My Way Back to You followed by Love Me For A Reason.

Louis Walsh confirmed he had fired Richard from the band. "I sacked him because he was unprofessional," he said. "He was a bad apple and one bad apple can spoil a barrel. He was too much of a risk and that's why he went. The rest is history.

When I found out who his dad was I thought he would have been a lot more professional. He is from a very nice family and I don't know why he behaved like he did."

While the boys went on to make millions, Richie struggled to make ends meet as a DJ and began abusing drugs to cope with his bitterness.

[Their success] drove me insane. I ripped the posters I had on my wall and threw out the scrapbook of photos I had with the band. If they came on telly while I was watching with my mum and dad, I would go mad and make them turn it off. Then I'd run upstairs and switch it back on again and watch it in silence with the volume turned down. That's when I started taking drugs to block out the pain. At first it was ecstasy and loads of alcohol. Then I got into heroin and I was doing up to pounds 200 worth in a day. If I was desperate I would go to my doctor for methadone."

After several rehab attempts he got clean in 2006 and works as a videographer and photographer in Goa, India, where he lives with wife Sadaf Javan.

Mark has always maintained that Boyzone was his idea and says on his LinkedIn page how he dreamed up the concept as a 15 year old boy at school with Shane Lynch.

Mark Walton missed out on Boyzone fame - but made a fortune nonetheless (Image: Facebook)

He then reached out to manager Louis Walsh as he 'started to put the band together' and was a steady member before Richie said he just 'disappeared' from rehearsals one day.

We broke off for lunch and when we came back, Mark had gone. He had disappeared.

No one knew what had happened and no-one dared to ask. It was as if he had been erased from history."

According to reports, Mark went back to school and later joined another band called Fifth Ave, telling the Sunday Mirror in 2001:

Mark, who used to go out with B*Witched's Edel Lynch, continued:

Although I was one of the original members of Boyzone I left before they signed their record deal. I don't think I was ready for it mentally then, but I know I am now. We've put in a lot of work over the last two years writing and practising. And although I used to regret not following Boyzone through to the end, I don't any more because I'm doing something that I love and I know Fifth Ave. are going to make it."

Mark moved to Los Angeles and forged a successful career as a music mogul, working with the likes of Jennifer Lopez, Shaggy and Enrique Iglesias, the Irish Mirror reports.

And in 2016, he claimed his earnings had spiralled into the billions.

I never planned to be in a position where I could be a billionaire from Ireland. Right now, I have the crazy glamour, big-name side to what I’m doing in my career that I think no one expected of me. And I intend to do a lot more with it than buy Lamborghinis and spend my time on the beach.”

Mark found himself thrust into the spotlight in 2018 when his ex-partner Sabrina Kouider was jailed for life for murdering French nanny Sophie Lionnet, 21, and burning her body in her back garden.

He flew over from the US for the trial, telling the Old Bailey:

Sabrina shared some stories from her past. I guess knowing that, I felt it brought us closer together at times, but it was turbulent, probably the most turbulent relationship I had ever been in. She would go from softly spoken French accent then she would flip, get very angry, very loud and just not care where we were. She would just go crazy over something trivial."