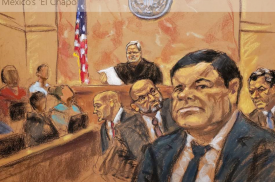 The beauty-queen bride of Joaquin “El Chapo” Guzman is sniffing around a possible role on reality TV.

“I can confirm Emma boarded the boat for a meeting with Michael. There is interest in having her on the show but things are still being worked out and we can’t speak for her side,” the source close to the show told the New York Daily News.

“Everything is on the table,” the source said.

Asked why Emma was invited on the show, the source cited her prominent pedigree.

“The fact that she’s Chapo’s wife says it all,” the source said.The meeting involved Michael and his partner Maria sitting down with Emma for a face-to-face discussion aboard a luxury yacht, according to TMZ.com, which first reported the talks.

Emma was dressed in an all-white ensemble while one of her bodyguards stood nearby in all black, according to a photo obtained by TMZ.

The young wife, 30, is no stranger to sartorial statements — or high drama.

During her husband’s 11-week trial in Brooklyn, the couple wore matching burgundy smoking jackets to court in an apparent show of solidarity amid damaging testimony from one of his mistresses.

The notorious narco, 62, was convicted Feb. 12 after jurors decided he was a bloodthirsty boss of the powerful Sinaloa drug cartel.

In July, he was sentenced to life in prison plus 30 years.

The once high-flying kingpin — who twice escaped from Mexican prisons — is now serving his time at the federal “Supermax” prison in Florence, Colo., known as the “Alcatraz of the Rockies.”

William Purpura, a Baltimore-based lawyer for Guzman and his wife, did not respond to a request for comment from the Daily News.

No matter what Emma decides to do, she’s not the only relative making headlines.

Guzman’s son Ovidio Guzman Lopez was captured by Mexican authorities last month and subsequently released to quell a spasm of wild gun battles and bombings waged by his henchmen on the streets of Culiacan in Sinaloa.