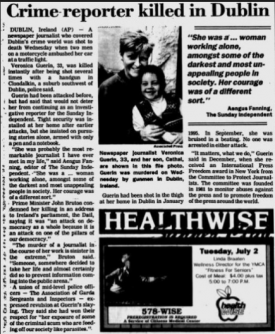 On 26th June 1996, the International Day Against Drug Abuse and Illicit Trafficking, in Dublin, Ireland an impudent drug lord ordered the killing of Veronica Guerin, an investigative journalist, who revealed the source of the finances of this well-respected in society businessman.

Is her death a personal tragedy or a public one?

There is no doubt that the suffering of her little son, her husband and her family is personal. Without any question it is a public tragedy as well. The agony of children damaged by heroin, living in the poorest areas of Dublin, the wild eyes of the synthetic drugs, or the marijuana debilitating smiles, bringing millions to the illegal drug dealers, leave no other choice to Veronica Guerin. According to the journalist, it is not enough that the media and the society know, acknowledge and expose the truth of the problems triggered by the use of drugs, but they should also demand that the institutions rise against the organized crime with the full extent of the force of law. Corruption has encouraged drug lords to feel untouchable.

The pain and sorrow of the parents, protesting on the streets, hoping to stop the drugs and to bring back their children, make the Irish journalist a strong fighter against evil.

Yes, it is a public tragedy, not just for Ireland, Bulgaria, or any other country, but for the whole humanity.

Every day the anguished and angry eyes of parents ask us why there is no cure for their children, why this insanity cannot be stopped - everyone knows who produces drugs, who sells them, who helps them, and all this is forbidden by law, but still drugs are easily accessible on the streets day and night, at schools, nightclubs, bars..

It is a great tragedy for a society when it is unable to protect the life and health of their children, to safeguard the journalists, serving in the name of the truth.

And even greater tragedy for a society is when it is a silent, voiceless witness or a shivering coward, allowing drug lords to become role models for the young generations, and the highest personal values to be associated with money and all their material benefits.

The Municipal Drug Council Blagoevgrad bows down before the self-sacrifice of Veronica Guerin, who has become a symbol of the fight against drugs, even though the UN and the European Parliament has not accepted to make it official, which would help for drug prevention to be more effective, when it has a real and charismatic person as a beacon.

The Municipal Drug Council Blagoevgrad encourages all journalists in Bulgaria to promote on a daily basis honest and worthy people, positive acts and deeds, as well as truthful facts about drugs and their influence upon everyone, so the young generations could establish and form real personal values and make them resilient against dangerous conduct and aggression. There is no other force in society as journalism, which can clear the lies, the misleading and hypocritical flow of words and actions, hiding the real path to salvation.

Bow before the memory of Veronica Guerin and all the journalists who lost their lives in the line of duty for humanity!